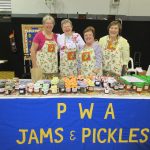 A special committee of the PWA in NSW, organises the Annual Presbyterian Market, which consists of approximately 20 stalls. Mrs Jeannette Norton is the Market Convener.

A Note from Jeanette Norton:  Our function this month was well attended considering delays on transport. Everyone in attendance enjoyed the trip down memory lane and the lunch was splendid Next meeting will be the 2nd Friday in November

Mrs Anne Ball presented a cheque for $28,000 to Mrs Laurel Benn and Mrs Elizabeth Brown and after discussion, it was agreed that this should be made out to APWM NSW for the work of Mick Alley. What a wonderful result.                  2018 PROJECT: Mrs Elizabeth Brown said how pleased PWMU were with the result of the project and gave us an update on the progress in Northern Kenya. Mick Alley has written that four Samburu women are being taught in their own language to work with the women. They will sit under the trees with other women to teach them. There is a large youth ministry and there were 500 – 600 at the Christmas Day service when Mick provided a meal. A bigger kitchen is now being built. Previously six people were baptised, later 38 people came forward, had baptismal classes and were then baptised. APWM have now sent information on Mick Alley’s work to all Parishes.

2019 PROJECT: As requested, Presbyterian Inland Mission has provided a submission for funds: PIM Ministry teams Colin and Alison Morrow (Mungo Patrol) and David and Gae McDonald (Darling Patrol) work in areas of NSW that are currently badly impacted by drought. Both couples are ministering to a range of people who are struggling with drought-related issues. Both couples need help with the vehicles they need to use and ongoing operating costs to keep them on the road as they minister to these people in need. Any financial assistance that PWA can provide in helping keep these two teams on the road will be greatly appreciated.

The first Presbyterian Market was held in 1914. Our Market in 2017 was the last Market Day to be held in the present form. We will be having small Market Days in each of the Presbyteries or Branches. So after 103 years we are able to say a big thankyou to all that assisted over the many years. In the years that we have held it, it would add up to around 2 million dollars in todays money. Continue to pray that we will continue to support the many Assembly Committees that have been supported over the many years.

Last years Market Day is with a new look and was held on Wednesday 18th October 2017 at Burwood Presbyterian Church Hall. Lots of Stalls with lots of goodies to buy. Enjoy a PWA cuppa again to meet up with your friends and make new ones.

Market provides an opportunity for Presbyterian women from all over the State to gather together to witness for our Lord.

The 2012 Project was to raise money to provide a Camper and Turbo for PIM (Presbyterian inland Mission). The amount was achieved with a cheque for $42,000 being given to the PIM.

The 2013 Project was to raise money to provide information for SRE for the teaching of Scripture in our local schools. The amount of $26,000 was given to the Presbyterian Youth Manager Mr Murray Norman.

The Project for the 2014 Market was our 100th Market and was for the Dementia Garden at Pittwood House. We were able to give $26,000 towards this project. This is now completed.

The Project for 2015 is for providing Satalite Phones for our PIM Padres. The 2015 Market day was held on Wednesday 14th October at the Hurstville Acquatic Centre. We were able to give $21,000 towards this project.

The Project for 2016 was for 2016 Submission was for Jericho Road Early Childhood Services to provide Speech Pathology services for the first time in Hawkesbury Presbyterian Preschool and to continue to provide Speech Pathology services at Tregear Presbyterian Preschool at a total cost of $25,000.  She said that in Tregear there are areas where children need help but parents do not know where to access it.  They were able to receive $30,000 from the PWA Market Day.

The project for 2017 is for Ministry and Mission, Mr Bruce Meller who spoke on the submission for 2017 Market funds and said on the need for Peacemaking Principles in Pastor Leadership skills.  Through the grace of God, help is needed to seek forgiveness from people who have been offended and to talk about their problems.  People turn away from their conflict not making mature decisions.  Isolated parishes in the Riverina Presbytery are experiencing difficulties, it is the smallest Presbytery over the largest area to cover, with long distances between churches.  Elders are working on reconciliation and have agreed to hold a seminar including churches in the Presbytery.  Running a seminar for 600 people attending costs $6,000.  Learning to solve conflict is fruitful, allowing people to grow more like Christ. Mrs Norton (Convener) had attended two of these seminars and said it was important that no PWA branches close in these areas and we should pray for these branches to remain open.  Mrs Barbara Clark commended Bruce Meller on bringing this to our attention, making us aware of problems in churches where there is a high need for peacemaking seminars. 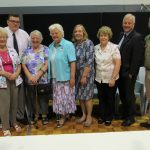 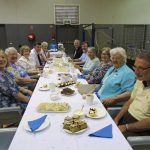